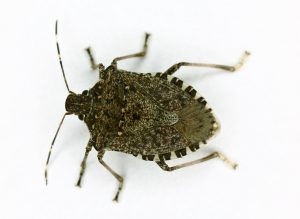 Lorre Kolb: Stink bugs in the house. We’re visiting today with P.J. Liesch, Department of Entomology, Insect Diagnostic Lab, University of Wisconsin-Madison/Extension, in the College of Agricultural and Life Sciences, and I’m Lorre Kolb. PJ, have you noticed an increase in these brown marmorated stink bugs?

PJ Liesch: So far in 2018, I’ve had a distinct increase in reports of the brown marmorated stink bug which is actually a non-native invasive species, originally came from Asia and it has behavior, in some regards similar to box elder bugs – they like to sneak indoors in the fall and then they kind of hunker down in a sheltered spot, but if they get too warm, they may find their way into the living areas of a home and become active. I have been watching this insect over the last couple years and activity and the number of reports has really been picking up in 2018.

Lorre Kolb: What do these stink bugs look like?

PJ Liesch: They’re about a half inch long, brownish in color, at the back end of their body they have, what I refer to as a checkerboard pattern, alternating kind of pale and darker squares and then one of the most distinctive features – if you look at their antennae, the antennae are brownish, but they have two very noticeable pale bands.

Lorre Kolb: How would you determine whether it’s just a few stink bugs or if there’s a larger problem?

PJ Liesch: A lot of the reports I get have been cases where folks find just a few of these insects indoors. I have had quite a few reports now where folks have been finding dozens or maybe a hundred or more of these in their home. And being stink bugs, they can be unpleasant creatures, they won’t bite or harm you that way, but they can smell really bad if you disturb them.

Lorre Kolb: So what should you do if you find these creatures in your home?

PJ Liesch: Scoop it up in a container and toss it outside or dispose of it by some other means. If you had lots and lots of them I would be tempted to use the hose attachment on the vacuum cleaner, just be aware that when you disturb them, they might release that scent from the stink glands that they have and that could be unpleasant for a little while. When it comes to dealing with them indoors, spraying indoors this time of the year in the winter or spring won’t really help much. A lot of folks, that’s the first thing they want to do. The ultimate solution with these though, stop them before they get in. Look at the outside of your home for cracks and crevices. Go around with caulk or expanding insulation foam, seal up those access points.

PJ Liesch: They are a significant concern for us in Wisconsin and other places in the country because of this behavior of sneaking indoors. Out in the grander scheme of things, they’re a significant crop pest or they can be. So they can be a major headache for apple and orchard growers and vineyards, but they can also attack vegetable crops and field crops. I’ve got colleagues in the state that are hoping to look for some of the good insects that are out there that might help parasitize them in the long run.