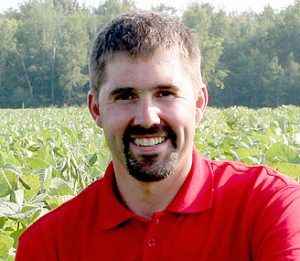 Lorre Kolb: The 2017 soybean-growing season. We’re visiting today with Shawn Conley, Department of Agronomy, University of Wisconsin-Madison/Extension, in the College of Agricultural and Life Sciences, and I’m Lorre Kolb. Shawn, tell us about the 2017 soybean growing season?

Shawn Conley: We’re going to see a record number of soybean acres planted in 2017. Last year, we had a record number of roughly 1.9 million acres. We’re probably going to see over 2.2 million acres planted across the state. Challenges we’ve seen is that some of these really frequent and heavy rainfall patterns have caused crusting issues across the landscape made it really hard for soybeans to germinate and emerge and I think any of the consumers out there who have a garden can understand what that pounding rain what that really does and it’s been a challenge to get those plants up and out of the ground this growing season.

Lorre Kolb: When do the plants need to be in in order to have a full growing season?

Shawn Conley: So, what we tend to see is after May 1, regardless of where you are in the state of Wisconsin, we like to see your soybeans planted at that date, but, again, because of the frequent rainfall patterns across the state of Wisconsin, we saw many of the soybeans got planted significantly later, which will lead to a reduction in the amount of yield potential out there. So, even though there will be a record number of acres planted, our yield production won’t be as great as it would be just because we didn’t get it planted on time.

Lorre Kolb: So, you’ve been doing some research on soybeans. Tell us about your research.

Shawn Conley: It’s been pretty interesting. A few years ago, we did this project looking at the effect of climate change on soybeans and soybeans production and what we’ve found is that Wisconsin growers are actually winning, mainly because they’re able to plant earlier and the weather patterns have been conducive for Wisconsin growers. Another thing that we’ve really noticed is that growers can plant earlier, which has changed what maturity group they plant. So, you could plant longer varieties or ones that aren’t as sensitive to frost. So we’ve seen those challenges that again affect not just the agricultural community, but consumers as well.

Lorre Kolb: So, starting to plant earlier helps combat some of the weather changes?

Shawn Conley: It does. A few things that growers really need to do is we would try to maintain as much residue on the soil. Because of the infrequent, but heavy amounts of rain, we need to keep a lot of cover on that so you don’t see washing or erosion, because it takes a long time to build an inch of topsoil. So, we want to protect that as much as possible and that also allows to have some more flexibility, because that soybean plant is a phenotypic plasticity, which basically means it’s very adaptive to the environment and it allows growers to really allow that plant to just grow and flex with the growing season. So, it’s much more hardy than a field of corn, because field corn usually has flowers within a week. So, all the flowering, everything is set within like a seven day timeframe. With soybeans, they flower for up to three weeks. So, again, we can take advantage of some of these weather patterns with soybean, which makes it a very adaptable plant across the landscape. Feel free to go to my website which is www.coolbean.info or follow me at twitter at AtBadgerBean.

Lorre Kolb: We’ve been visiting today with Shawn Conley, Department of Agronomy, University of Wisconsin-Madison Extension, in the College of Agricultural and Life Sciences, and I’m Lorre Kolb